I decided to join the club and make myself a VAF hat to wear when I’m out and about to represent one of the greatest communities I’ve joined.

Vansairforce has been a huge help in providing information during my build. I’ve had nearly every question answered by someone on the forums. I’m proud to represent a community that is helpful, kind, and supportive during the long and sometimes very difficult process of building. Can’t wait to hop in my plane with my VAF hat and explore the world!

Today I spent a few hours working on the left wing. 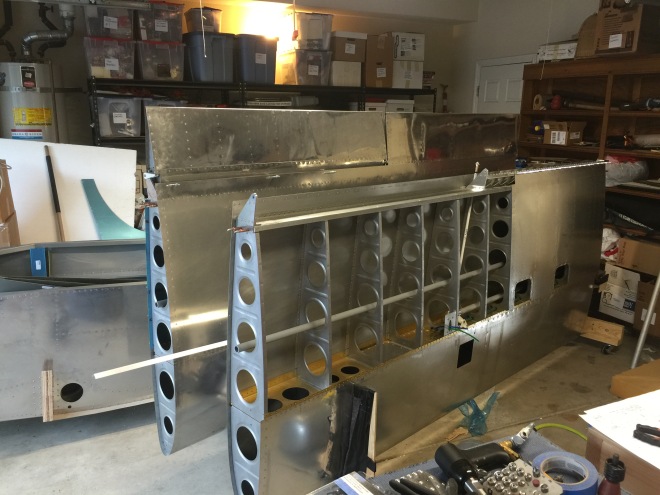 I started out by removing the flap and aileron, so I could get access to the aileron brackets. Because I didn’t rivet the brackets, I was able to perform the bracket service bulletin.

It involved riveted two doubler plates to the backside of the spar behind the aileron bracket. Here you can see the row of rivets holding those doublers in place.

I then proceeded to install the aileron gap faring.

Of course I edge finished, deburred, and primed the surface prior to riveting. Once that was installed I spent some time installing he aileron and determining the correct washer count and making sure I can get access to everything.

I then installed the aileron with the alignment bracket on the bellcrank to align the flap and check the gap between the two.

I also installed a pvc conduit for wingtip lighting. I fabricated some small L brackets to attach some adell clamps to hold the conduit. Once I finalize those I will be ready to mount the conduit and the wing will essentially be done! (Obviously the skin remains, but there’s no rush to install that until much later.)

I finally had a little bit of time to get back into the garage! Work has been killer over the last few weeks and I’ve had no energy. But today I got a little bit done. I removed the aileron and flap from the left wing, prepped the flap hinge for riveting and set it back and realigned it. No pictures but it’s pretty straight forward stuff. Next on the list is to perform the SB for the aileron brackets. Which shouldn’t be too hard considering they aren’t riveted on yet. Hopefully I can find time tomorrow to do it. Til next time!